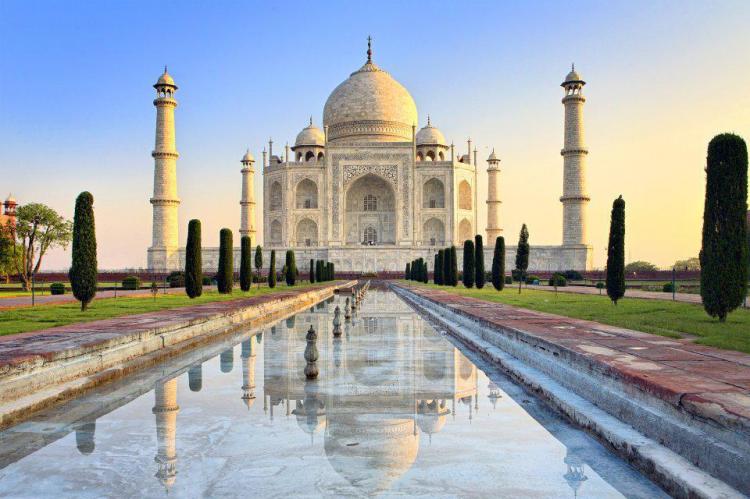 The finest Mughal architecture depicting the immense and unconditioned love!


Taj Mahal is one of the popularly known white marble monument located at the south bank of the Yamuna river in the city of Agra. This is one of the most beautiful monuments in India and has been recognized as one of the wonders of the world and has also been designated as the UNESCO World Heritage Site. The architecture depicts a blend of Indian, Islamic, and Persian styles. Each year, the monument is visited by thousands of tourists across the world.

Taj Mahal was built in December 1631 by the Mughal emperor Shah Jahan in the memory of her beloved and favorite wife, Mumtaz Mahal who died while giving birth to their 14th child, Gauhara Begum. Being deeply saddened by her death, Shah Jahan planned to construct a monument that could match with the beauty of her favorite and beautiful wife. His wish got fulfilled with a luminous tomb-like structure that is known as the Taj Mahal. The overall cost incurred to build this magnificent place was over Rs. 32 million during that time while is equal to over Rs. 70 billion in 2020. It took more than 20k workers to build this magnificent monument.

Taj Mahal is recognized as the jewel of Muslim art in India and is also known to be one of the most recognized architects across the world. The monument encompasses an area of 42 acres in Agra in Uttar Pradesh. The monument is made of white marble surmounted by stunning gardens, lavish ornamentations, along with waterways and fountains around.
The main door of the Taj Mahal present at the end of the waterways is built of the massive sandstone gateway comprising solid silver. This is built in such a way that people cannot get a glimpse of the tomb until they enter the door of the Mahal. The door is bordered by Arabic calligraphy over the stones made of Black Stone.
Of the land area of over 580x300 meters, the garden covers an area of 300x300 meters. The symmetry in the alignment could be seen everywhere. The whole pathway divides the four quarters into 16 flowerbeds. Entering the garden boasts a uniquely tranquil and soothing effect which empower the visitors and allow them to spend some time with the beauty of nature.
The dome is symbolic of the throne of Allah and is supported by the pillars at the four corners of the Mahal. This represents the flow of grace and also includes verses from the Holy Quran. The structure of the Tomb is well-furnished with lamps, silver doors, carpets, and others.
Inside the Taj Mahal, there exist the cenotaphs of Shah Jahan and Mumtaz Mahal in an 8-sided chamber developed from pietra dura and a marble lattice screen. This is, however, just to showcase, while the real sarcophagi are placed in a quiet room i.e. located at the ground below.
From dawn to dusk, the Taj Mahal changes its colors several times. This is because of the sun’s rays and weather conditions. Before the sunrise, the monument appears darkish. During sunrise, it appears pinkish. Before noon it appears pale yellowish and changes to the white color afternoon. In the evening i.e. at the time of sunset, it appears orangish and in the full moon night, it changes to a bluish color representing the magical colors of the monument.