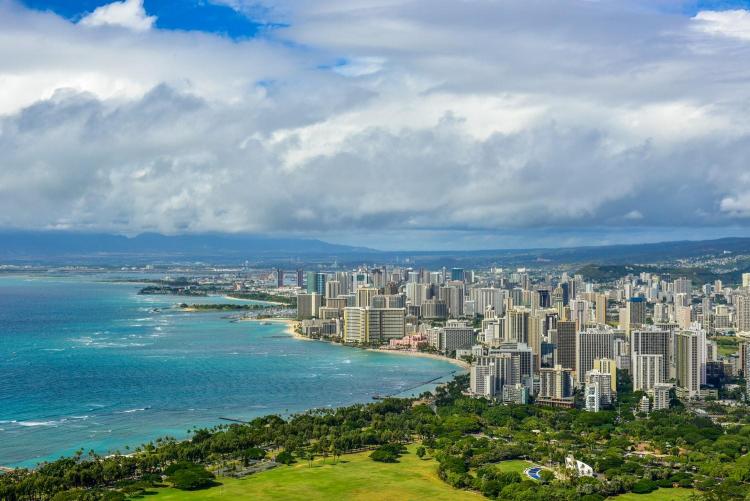 Honolulu is one of the most popular destinations in Hawaii and is a major city, being located at the far end of Waikiki. The main tourist hot spots in Honolulu are the downtown district - the Pacific Region’s main financial and business center, and Waikiki, the heart of Honolulu. Waikiki is known for its narrow sandy beach area, which has become one of the world’s most notable beaches, lined with many excellent shops, restaurants and accommodation.

Located on Hawaii’s Oahu Island, Honolulu is full of things to see and attractions to visit. Dominated by the imposing Diamond Head volcano, which is now extinct, Honolulu is known for its tropical landscape, palm trees, harbor, nearby islands and the Mamala Bay, where a range of water sports are on offer.

With a large population and many spreading urban areas, traffic in Honolulu can become understandably busy, particularly due to the cluster of one-way streets. There are a number of car parks and on-street parking areas in central Honolulu, and car rental is widely available. Renting a car in Honolulu is one of the most convenient ways to explore the island of Oahu, although other popular methods of transport include buses, coaches, taxis and even bicycles.

Honolulu International Airport (HNL) stands around 4 miles / 6 km from the center of the city and is an important transportation hub. Many passengers arrive each day at Honolulu Airport from mainland America, London and other nearby Hawaiian Islands. With three terminals and a range of facilities, the airport is just a short trip from central Honolulu, with a number of hotels nearby.

Places to Stay in Honolulu:

Honolulu thrives on tourism and there is a huge range of accommodation throughout the city. Hotel rates in Honolulu are often high, although a selection of budget options do exist, namely bed and breakfast accommodation, which is usually well presented. The American Youth Hostel in Honolulu offers extremely inexpensive rooms and is always popular with budget travelers visiting the city.

At the opposite end of the scale, Honolulu is home to a wealth of luxury hotels, often with simply breathtaking coastal views and convenient locations. Some of Honolulu’s premier hotels are amongst the best in the world.

Tourist attractions in Honolulu are excellent and apart from the endless stretches of golden sands, there are plenty of things to see, making Honolulu the ideal holiday destination. Facilities include landmarks and monuments, historical museums, contemporary art galleries, must-see sights, and a large variety of recreational activities.

There is an incredible diversity of restaurants and places to eat throughout Honolulu, reflecting the ethnic communities and locals. Look for the restaurants where locals in Honolulu choose to eat, such as those around the University of Hawaii at Manoa, where you will find an array of affordable cafes and food outlets. Also, the food court in the Ala Moana Center is particularly well stocked.

The weather in Honolulu varies only slightly all through the year, with constant temperatures reaching the 70s and 80s. Honolulu features two main seasons - April to November, which is slightly warmer than the period December to March. The surrounding ocean remains warm throughout the year and is one of Honolulu’s main attractions.

Photo by Zetong Li on Unsplash